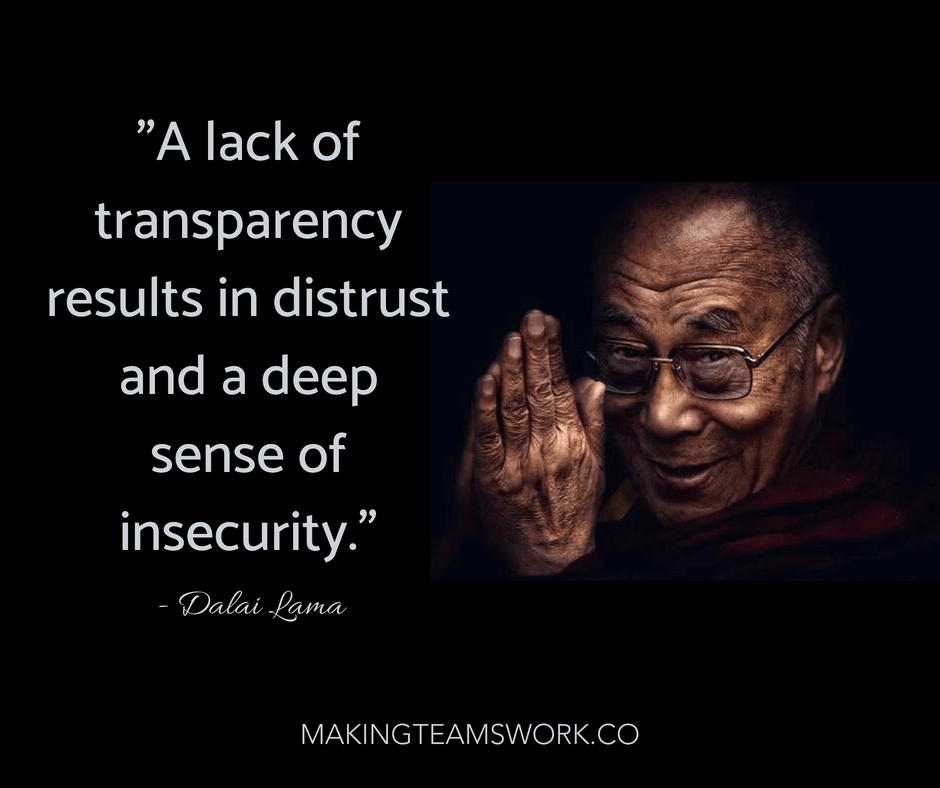 Here’s one fundamental reason why:

As human beings, we have tendencies.  One of our truly human tendencies is to fill in the blanks.  And we generally fill them in with the absolute worst case scenario.  Why?  Because we’re designed to protect ourselves – it’s human nature.  So when blanks of any description are left, our brain gets to work on deciding what the possible reasoning is and how that reasoning might affect us.  This tendency is fuelled by fear, and you can imagine where it can lead us, given the opportunity.

Honesty and transparency are hard:

Honesty and transparency may be two of the hardest qualities that leadership asks of us.  They require that we state our truth openly and fully – which leaves us no space to manoeuvre if things don’t go the way you expect them to.  It means that you must continue down the path of truth you’ve chosen regardless of the outcomes or consequences, and it requires that we take fully responsibility for those outcomes and consequences.  You can see where the vulnerability comes into it.  Here is where we question ourselves in our quiet moments about the true strength that we hold when leading people.  Are you strong enough to be vulnerable?  Are you strong enough to champion truth?

What does vulnerability gain you?

Let’s go back to that human tendency to fill in the blanks with the worst case scenario, and look at the cost of leaving those blanks for the people we lead to fill in.  Leadership puts us in a position of imminent failure.  We are, after all, only human.  At some stage, something will go pear-shaped, and we’ll have to admit that we didn’t get it right.  And THEN what will people think of us??  There are herds of quotes on the link between leadership and failure, and all percolate down to the fact that failure is a requirement of progression.  Leadership and success are about how many times you were willing to get back up again after those failures.  So assuming that failure at some stage is certain, let’s look at the cost of honest and transparent leadership.

One way, or another:

There are two ways to do this – each with different costs and outcomes.

The outcomes of these two options may seem counter-intuitive until you factor in the afore-mentioned human tendency.

The choice of leadership:

The baseline here seems to be where you allow the weight to land.  Are you willing to take it fully on your own shoulders?  To be responsible for stating the facts in a timeous and open fashion so as not to burden your team with the human tendency to fill in the blanks?  To be fully responsible for the projected aims and the outcomes, even if they are not favourable or as expected?  Are you strong enough to lead your team through Plan B; through hurdles, hiccups, failure and to retain their trust while you do so?  Or do you need them to cushion the load for you?

The Dalai Lama summarised “The lack of transparency results in distrust and deep sense of insecurity.”  Cushioning the load can be an exhausting task for your team, and it may mean that they no longer have the energy to follow you through Plan B.  It may also mean that you have made sacrifices that are exceedingly hard to recover from.  Sacrifices like trust and dignity – on both sides of the equation.

Here’s the kicker:  It doesn’t matter if you fill in the blanks with the truth later.  Distrust and insecurity are incredibly pricey to rectify.

When assessed this way, I personally feel the price of honesty, transparency and vulnerability in leadership start to look viable.