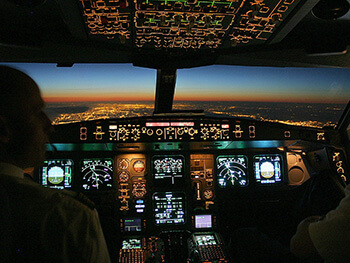 When you walk into your office on any given morning, what are the things that influence you? Did you over extend yourself during the weekend?  Are you still seething from the argument you had with your partner or the imbecile who cut you off in traffic? Have you yet to pull your brain away from celebrating that hole-in-one which is far more captivating than whatever’s lurking in your email inbox? Are you thinking it may have been a mistake to take two painkillers instead of just one? Or are you just uninspired to start another week the same as the last?

Maybe you’ve bounced into work, ready to throw your passion behind your business and everything you feel it could achieve! If that’s the case, do you belong to a dream team of equally focused and driven people, or are you about to come up against any one of a number of things that may drain or redirect that energy?

Why should it be any different for the crew of an aircraft?  Have you ever considered as you strap yourself in that the Captain may be getting divorced or that the First Officer’s mind may still be on the vacation he’s just returned from? Does it concern you that their mental attention might be somewhere other than on ensuring all boxes are ticked and the aircraft you’ve just boarded is in peak condition to transport you to where you’re going without incident?  Does it add to your concern that these crew members may never have met before today, let alone have a working relationship established? Worse still, what if the hungover First Officer is about to undertake a training flight with the father of the woman he’s planning to propose to? These are all possibilities – and Crew Resource Management is the discipline that works to make sure that none of these variables affect the outcome of your flight!

Crew Resource Management (CRM) was born out of the analysis of the crash of United Airlines Flight 173 in the late 1970’s. The DC8 aircraft was enroute from New York City to Portland, Oregon with a stop in Denver, Colorado. They had 181 passengers, 8 highly experienced crew on board and more than enough fuel for the flight. On arrival at Portland, the undercarriage did not operate as expected and they aborted the landing so that they could diagnose the problem. They then became so absorbed in diagnosing the problem, that they ran out of fuel and crashed killing 10 people and injuring 24. To add to the sting, the First Officer and the Flight Engineer KNEW they were running out of fuel and failed to adequately communicate this to the Captain.

As a result, in 1979 the National Transportation Safety Board issued its landmark recommendation to require CRM training for all cockpit crews. NASA held a workshop endorsing this innovative training a few weeks later.  Initially intended for cockpit crews, the subject has expanded over the years to include cabin crew as well in acknowledgement of the instrumental part they play and their value in the success of the overall mission.  “CRM can be defined as a management system which makes optimum use of all available resources – equipment, procedures and people – to promote safety and enhance the efficiency of operations.  CRM aims to foster a climate or culture where the freedom to respectfully question authority is encouraged.  However, the primary goal of CRM is enhanced situational awareness, self-awareness, leadership, assertiveness, decision making, flexibility, adaptability, event and mission analysis and communication” – Wikipedia.

Since its inception, CRM training concepts have been modified for application to a wide range of activities where people must make dangerous and time-critical decisions; these arenas include air traffic control, ship handling, fire-fighting and medical operating rooms.

Sound like overkill as far as your business is concerned?  Why would tools designed for “activities including dangerous and time-critical decisions” work for you?

Firstly, how much damage does it cause when attitudes or lack of communication mean people within different tiers of your business can’t talk to each other? Secondly, business has changed somewhat in the last few decades as sited in this excerpt from Anne Scoular’s Guide to Business Coaching:

Not only do these points paint a much more complex picture moving at a greater speed than we give credit for, but in addition there are the concerns of competition, the fast and ever-changing needs and wants of consumers, not to mention the fact that great innovation still generally comes from outside the industry it affects rather than being produced from within. Kerosene lamps were hot trade until Thomas Edison came along!

We are working in high pressure times. Effective production of energy and its efficient use towards its best agreed direction and outcome is the key to survival in this environment. Not to mention that it should be fun, empowering and mind-expanding to come to work – where you spend the majority of your waking hours! Can we really settle for less in this day and age?

If Crew Resource Management can pull together a crew that may never have met or worked together before today’s flight, and who all come to the party with different backgrounds, mindsets, emotions and experiences – imagine what it could do for your business! The possibilities are mind-blowing!